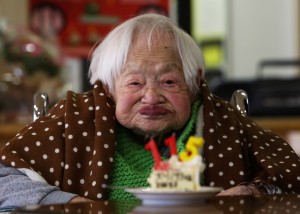 OSAKA, JAPAN – MARCH 05: Misao Okawa, who is recognised by Guinness World Records as the world’s oldest woman, receives a birthday cake during her 115th birthday celebrations at Kurenai Nursing Home on March 5, 2013 in Osaka, Japan. Misao Okawa, was born in Tenma, Osaka, on March 5, 1898. A descendent of Kimono merchants, she married in 1919 and had three children, of which a daughter and a son are still alive, and four grandchildren and six great-grandchildren. (Photo by Buddhika Weerasinghe/Getty Images)